What Distinguishes a University from a College?

What Distinguishes a University from a College? 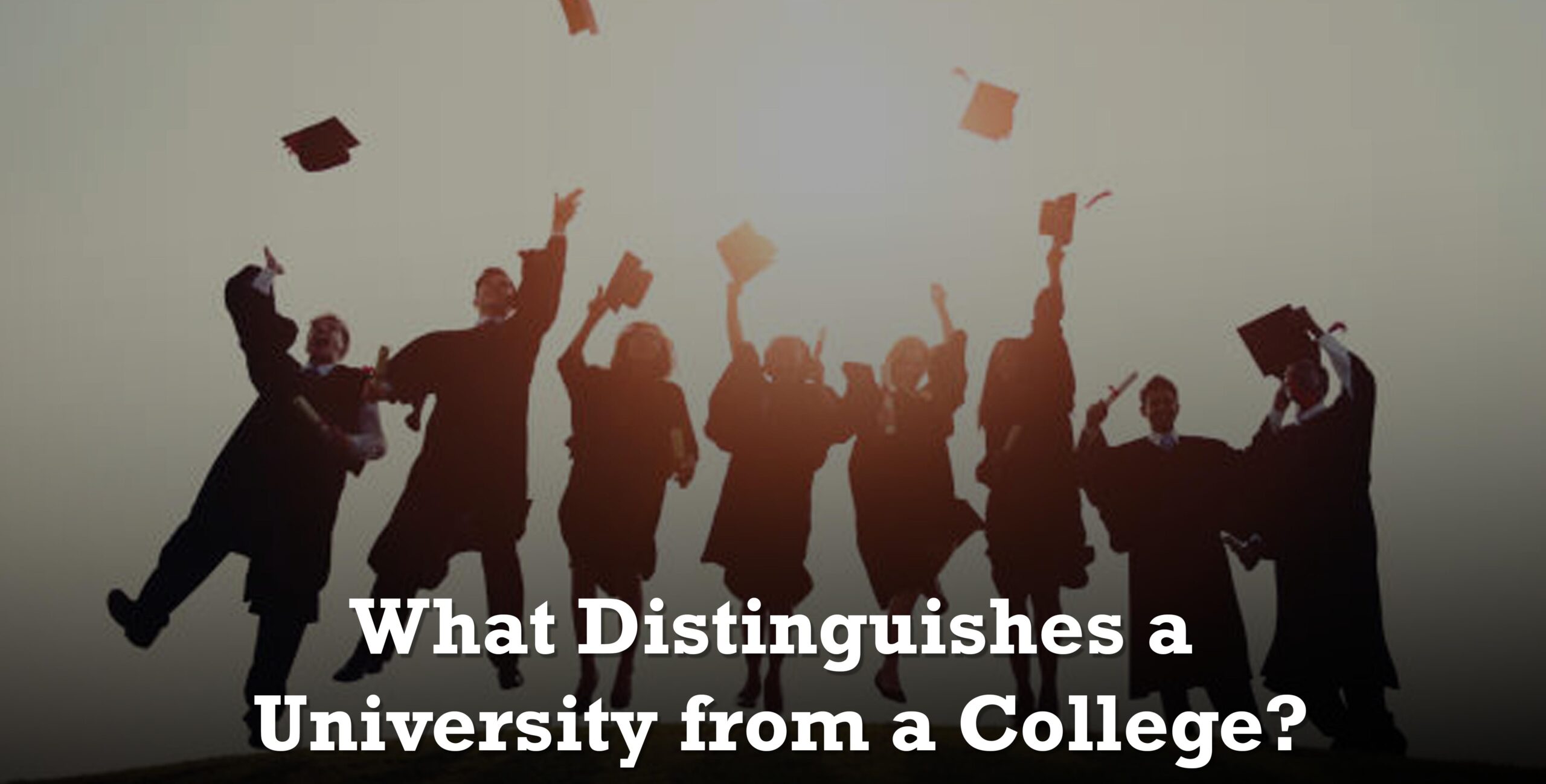 Universities and colleges both award undergraduate degrees. Academically speaking, they are usually on par. But in order to be called a university, it must also fulfil several other criteria. Given that the meaning of “college” differs depending on the place and language, it is crucial for students to comprehend the variations between the two words. Some students may even disregard schools with the “college” moniker in favour of just considering universities as a result of the terminology misunderstanding. Let’s compare the two immediately.

What is a university?

Universities are both undergraduate and graduate-level educational institutions, whether they are public or private. These schools, which pride themselves on having vibrant, varied environments, typically have large campuses and a wide range of programme options. Private colleges are often smaller and more selective, in contrast to public institutions, which can enrol tens of thousands of students.

Universities are also increasingly focused on research in general, offering an incredible array of resources and labs to aid in this endeavour. Many universities, like Stanford University and Johns Hopkins University, hold formal research designations and invest billions of dollars annually in R&D. Students gain by taking lectures taught by some of the most accomplished academics in their subjects, even when university instructors may transfer their attention to publication and research.

What is a college?

In comparison to universities, colleges may have smaller student numbers, more personal campuses, and fewer programme options. These schools are mostly private and get very little or no governmental financing. As a result, many institutions give less weight to scientific initiatives and may even be strongly religious.

Community, vocational, and technical colleges can also be included under the umbrella word “college.” Most of these colleges only grant associate degrees and certificates, while a small number of them also grant bachelor’s degrees. Most people probably picture four-year institutions with small class sizes, low student-to-faculty ratios, and undergraduate-focused programmes when they think of colleges. For instance, liberal arts universities emphasise the value of studying a variety of academic areas as part of their comprehensive approach to education.

Other universities, however, could offer studies in only one field, like engineering, graphic design, or the visual arts. Vocational and technical colleges are educational institutions that offer specialised professional training. These are intended to be appealing to a limited, specialised set of students who have an interest in a certain industry. Because there is already a university by the same name, some colleges, which are legally universities, choose to call themselves colleges. As an illustration, although though the College of Charleston’s name contains the word “college,” it is actually a public liberal arts and sciences institution.

What about universities’ internal colleges?

Different programmes of study are usually divided into subsets of colleges at large institutions. With these classifications, prospective students may need to apply to a specific college rather than the university as a whole for the subject they wish to pursue, like nursing. This is mostly because more competitive programmes are scarce and have specialised curriculum.

Students who are studying comparable disciplines and have similar interests tend to feel more a part of an academic community in colleges within universities.

Should You Attend College or University?

When determining whether to attend a university or college, students need take into account a number of variables. Compared to small institutions, which promise a close-knit community and more personal learning environments, large universities provide an almost infinite range of academic routes, people, and resources. Vocational and technical schools may be the perfect choice for those who want to avoid wasting too much time in general education classes and get into the workforce as soon as feasible.

Although the cost of trade school should be taken into account, full-time students may often complete career-specific credentials in less than two years. Learners drawn to the conventional college experience may feel more at home in a major university or small liberal arts college because of the rich campus environments and different student bodies. Students on a budget who wish to earn a bachelor’s degree could think about starting at a two-year university. Before moving to a four-year institution, completing general education prerequisites is still a very economical choice that can save you money.

Starting at a community college, though, might not be the greatest option if you’re concerned about maintaining interest in your studies and would feel more productive in a buzzing university setting. The pros and cons of each type of higher education institution are listed below. You must choose the one that most closely fits your personality, hobbies, and financial and professional objectives.

In light of this, here are some things to remember regarding schools and institutions if you want to study abroad: